Run Time: 42:41 Toledo Mayor Carty Finkbeiner delivered his 2009 State of the City Address to members of the Toledo Rotary Club and the Toledo business community in the ballroom of the Park Inn hotel downtown. In his address, the mayor gave an early look at several multimillion dollar economic development projects expected to be launched this year that will create hundreds of new jobs, and he spoke of several former vacant downtown Toledo buildings that are currently undergoing extensive redevelopment with an investment of more than $60 million. The key message of Mr. Finkbeiner's speech was his belief that Toledo has become one of the nation's most progressive and innovative alternative energy centers. To bolster his claim, the mayor cited excerpts of reports from a variety of media, including CNN and the Wall Street Journal, and also shared what President-elect Barack Obama, Ohio Gov. Ted Strickland, and other elected leaders have said about Toledo's leadership role in the alternative energy industry. Mr. Finkbeiner also spoke of his plans this year to continue the city's transformation into a leader of the green revolution, saying workers at the local General Motors and Jeep plants will be the leaders in alternative energy-based manufacturing. 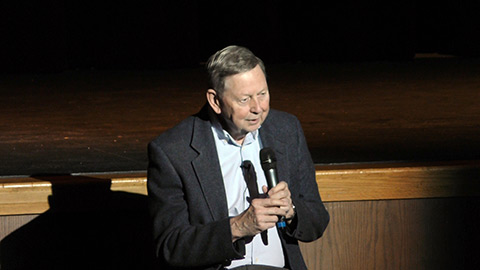